We are an AKC Breeder Of Merit Bronze & PA State Licensed & Inspected. Puppies From Mercedes & Dalton Due October 19th.Taking Deposits Now,Will Let Tails on If Wanted.

If Your looking For A Reputable Breeder Please Visit The MASCUSA Breeders!!!!

If you are interested in learning more about puppies available from Dodge City Miniature American Shepherds contact:

The food that we feed and recommend is TLC Pet Food. 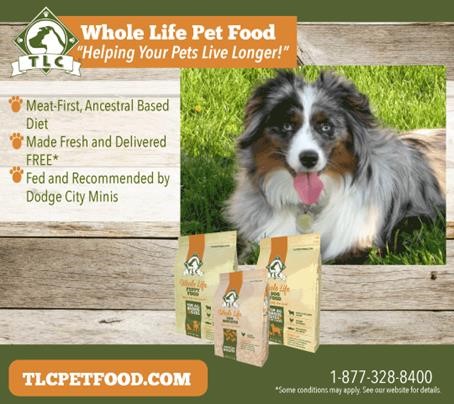 What Do I Need to Know Before Owning a Miniature American Shepherd as a pet?

Aussies are working dogs. They are bred to herd sheep, cattle, and other similar animals. They are capable of running very fast, jumping up to 6 feet from a standing start, and have a cat-light agility.  Like any good herding dog, they nip at the heels, and will attempt to herd kids, ducks, chickens, or anything else that looks to them like it should be gathered together and guarded. Though not an overly large breed, they are ferocious when they guard because they were specifically bred to counter the coyote as a predator. This can make them very aggressive when guarding your yard, or your person, and one of the reasons why they are sometimes used as guard animals.

As puppies, and even as adults, Miniature American Shepherds they are compulsive chewers. They chew on shoes, they chew on books, they chew on the furniture. You can train them to chew only on appropriate items, but you cannot train chewing out of them as a behavior. That means that you must be willing to invest a fair sum of money in durable chew toys, and you need to spend the time required to redirect their chewing behavior.

The Aussie energy level is infamous.  they will play at Warp 9, running, bouncing, humping, and then drop wherever they are and sleep.  As puppies they play “speed racer” wherever they find themselves. This high an energy level is exhausted for most humans. It is one of the primary reasons for inexperienced owners to give up on an Aussie dog, and why so many Aussie Shepherd pups are abandoned.

Even if you have a fenced back yard, you need to provide an Aussie with extensive walks to curb some of the energy that they are generating. When we say walk, we don’t mean the up to the end of the block and back kind of walk. Aussies need to be able to exercise, and their idea of a walk is measured in miles, not yards. Aussies also need socialization with other dogs.  Play with other dogs is important. Play with you is important too, though you need to understand Aussie’s play to be prepared for it.  As puppies, they nip, they bite, they growl their very best puppy growl, they attack moving objects, bark excitedly, all in play.  You will become the recipient of plenty of sharp love at the hands of puppy teeth and claws.  They will jump up and nip your nose, grab your lip, and maul your arms.  The lip grabbing is unsettling at first, but that is one of the things they do to redirect the path of a sheep.  They just need to understand that you are not a sheep, and it only takes being scolded a couple of times before they quit.  It is important to understand that it is part of their nature, not them trying to be aggressive or vicious. As adults, they love to fetch balls and Frisbees, or virtually anything else that you can throw.

Aussies have been used as service dogs for the blind and handicapped, and are one of the best breeds for this kind of work.  In northern climates, they are even used as short haul sled dogs.  The tremendous versatility of the breed is one of the main reasons for their popularity today.  Unfortunately, popularity has its price.  As a result of the popularity, they have become one of the most sought after pet dogs, and that has led to over-breeding to fuel the pet trade, and to thousands being abandoned each year in shelters nationwide.